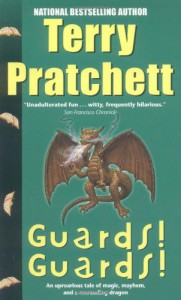 It's easy to see why Pratchett and his Discworld series are so highly recommended and beloved by fans across the multiverse. Pratchett has the dry, sardonic literal comic fantasy genre down pat. In fact, I can't think of another fantasy author who has bothered with the same approach. Pratchett is to fantasy what Addams is to sci-fi, or perhaps it's the other way around, and if you're a fan of one, you'll most likely be a fan of the other.

Discworld is a difficult series to approach. Its canon is massive and the chronology complicated - especially for sticklers of order and continuity like myself. I studied like five reading order guides before finally figuring out how it's all put together and choosing a starting story arc and I still feel like I'm missing half the references, which I'm sure is the point and ultimately leads to the series re-readability. If you're in the same boat, the most helpful guide I've found is this one. It's simple, visually neat and pretty much self-explanatory for the non-initiate.

Guards! Guards! is a clever mish-mash of genres from comic fantasy to police procedural and focuses on the rather underwhelming City Guard of Ankh-Morpork. Pratchett introduces us to the city and the wider Discworld through the character of Carrot, a human being who believes he's a dwarf as he travels from the mine he's called home for as long as he can remember to go out and "live amongst his own kind." While not necessarily the central character, new readers might feel more of an affinity for Carrot as a stand-in. He's as new to the city as we are and we meet it's denizens with the same confusion and curiosity (although perhaps with less literal-mindedness). The story semi-centers around Carrot's joining of the Guard, his integration into Ankh-Morpork society as he learns the ropes from veteran guard members Vimes, Colon and Nobbs. We're simultaneously introduced to the plot that binds the multiple narratives of Guards through meetings of the Elucidated Brethren of the Ebon Night (which seem more like comic AA meetings rather than the meetings of a secret society), as they attempt to overthrow the Patrician of the city with an elaborate scheme involving the summoning of a dragon and the invention of a dragonslaying puppet king. Can the inept, lazy, corrupt City Guards unravel the plot and save the city? Will the introduction of Carrot Ironfoundersson to the Watch be a catalyst for their transformation? Only time, a peculiar property of the Discworld Universe can tell.

Pratchett is a quippy and observant commentator on the human condition, projecting silly aspects of contemporary society onto a fantasy canvas where their absurdities can become readily apparent and safe for discussion and dismissal. He's also a very, very smart man. The narrative builds in references to complicated physics, a vast knowledge of history and popular culture that makes it difficult to tell the relationship between the fantasy Discworld and our own for they seem to share a lot of properties. Pratchett's prose is easily readable and his voice has the lulling quality of campfire oral tradition that is the mark of a master storyteller. I always find these types of stories intellectually appealing (the same way Addams or Vonnegut are), without being totally engrossing. There's something about the overly-sophisticated and smart narrative that disconnects me from the plot as I appreciate and spend time dissecting the means by which the story is driven along. It's not a terrible thing. In fact, it's refreshing to take a story and just think about word choice and construction every once in a while. I just haven't found an author who manages to do both in a completely immersive fashion.

Still, I count this as a successful first foray into the Discworld Universe and definitely adding the rest of Pratchett's works confidently to my to-read list. I can't say for certain until I've read more of the series, but I thought this was a fantastic place to start.
Tweet