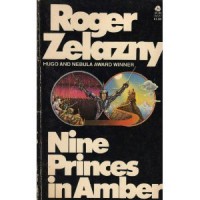 Two multiversal books in a row? And fantasy books, no less. Enter Corwin, amnesiac prince of Amber on a mission to find out why he woke up under forced sedation in a hospital on our Earth and the events that led him there. The journey of discovery takes us beyond the veil of our own world (and many others like it) to the one true world of Amber, of which all other realities are shadows. Along the way we're introduced to the key players, mostly members of Corwin's family, rivals as much as friends, for the throne in Amber. Corwin's tale is a tale of discovery and revenge in a moderately inventive world, given the original date of publication.


I have to admit pure puzzlement at the ardor of love professed by advocates of this book. I can only chalk it up to sentimental value for those that read it at a more impressionable and less critical stage in their reading careers. The Kindle version I read was a poor adaptation with tons of typographical errors that distracted me, but beyond that I thought the writing was poor to fair at best. Zelzany delivers the occasional great metaphor or line, but the combined usage of 70s colloquialisms and high fantasy rhetorical thees and thous was jarring, awkward and ridiculous. It sounds strange to read epic fantasy where characters end info dump paragraphs that are semi-enjoyable with "dig?," get high when they have some down time and have random, consensual cheesy 70s sex with relative strangers. The pacing is pretty horrendous too. It's a quick read and the plot moves along without significant drag, which tends to be the bane of a lot of modern fantasy novels. However, it does so in fits and starts that are simply colossal in magnitude. Mild spoilers ahead: After a rather long accounting of epic battles involving hundreds of thousands of soldiers and thousands of ships, Zelzany condenses the Siege of Amber to an uphill battle on a mountain trail wide enough to only fit one man abreast. We're led through martial exploits of derring-do as the vanguard in front of Corwin and his brother Bleys is whittled down, numerically, paragraph by paragraph over the course of several pages only to reach the penultimate moment with this line: "Let's be brief. They killed everyone but me." To make matters worse, after being led to believe that the entire army had been decimated, Zelzany clearly indicates that there were some troops in reserve behind the Princes. This sort of narrative oxymoron appears time and again throughout the story. Long detailed sections describing the passage of time, cut short by phrases like "Then a lot more time must have passed." It's the literary equivalent of "Oh man I got in an accident because I was in the right lane and a red sedan with one headlight and a "Praise Jesus" bumper sticker cut me off at the intersection of Vermont and Olympic when it was 65 degrees outside and the humidity was 5%...and anyway some other stuff happened and now I'm being released from the hospital...A month and a half later." I just wasn't a fan of the narrator in general and I felt that he stated the obvious in odd little sentences that my brain go into mini-convulsions of rage. I mean come on, "I rubbed at the stubble on my chin and went where they took me"? Really? Of course you went where they took you. I think apologists might defend that sort of thing by saying it adds authenticity to the first-person narration, but I just find it sloppy. Once I could forgive, but Zelzany makes a habit of it and it happens far too many times in 175 pages he used to tell this story.

Does Nine Princes have anything to recommend it? Well, the world itself isn't too shabby and the power that the denizens of Amber have over the fabric of the multiverse has some intriguing possibilities. I didn't feel that Zelzany sold the war for the throne convincingly enough as motivation for Corwin, and I felt that he participated in that venture more out of the expectations and tropes of the genre than because of anything personal, but perhaps that's because the reader spends half the novel in the dark along with Corwin himself. The amnesiac bit was a good way to introduce the reader to the world as Corwin's quest of self-discovery is a convenient vehicle for informing the reader, but that's also a convenient way to sidestep the usual narrative rule of "show don't tell." Compared with my recent read of Terry Pratchett's [b:Guards! Guards!|64216|Guards! Guards! (Discworld, #8)|Terry Pratchett|https://d202m5krfqbpi5.cloudfront.net/books/1347382469s/64216.jpg|1128601], where a similar technique is employed using the man-dwarf Carrot Ironfoundersson, I found Zelzany's usage amateurish. Corwin himself is rather interesting and you can tell his years of self-discovery on Earth have definitely changed him in significant ways and the humanistic and compassionate urges he feels, but can't necessarily explain throughout the story preserve the kernel of an idea about redemption and personal transformation that could lead to more interesting choices and critical moments in the future of the story if handled deftly enough. The problem I'm having at the moment is that Zelzany hasn't really inspired a lot of confidence in me that he'll take the story to those potential high points.

Still, this series is solidly embedded in NPR's list of top 100 Sci-Fi/Fantasy novels and it certainly has a huge fan base. I take some hope from Tor.com's Rajan Khanna. In his blogged re-read of the series, he observes, "One of the amazing things about this novel is that it’s mostly set-up for what comes later. It’s certainly engaging and exciting, but it has very little to do with the storyline that becomes the focus of the next four books. What it does do is introduce us to Corwin, show us his family and their allegiances, and explains Amber, the Pattern, and the Trumps. All of these elements will be tweaked a bit in later books, but they’re established here for later use." I don't know about "amazing," but that sounds kind of promising. Given that the series spans ten books, maybe a little more investment is required to see things start to pay out. And hey, [b:The Guns of Avalon|62012|The Guns of Avalon (Amber Chronicles, #2)|Roger Zelazny|https://d202m5krfqbpi5.cloudfront.net/books/1368213721s/62012.jpg|1105543] is only 223 pages, so maybe I'll invest one more day before abandoning ship.
Tweet