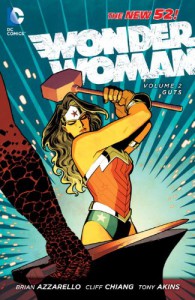 Azzarello's work on Wonder Woman has been nothing short of impressive, and it's quickly become my favorite of the New 52 titles. Completely self-contained, the story arc is a great introduction to the DC universe for new fans or those coming back to comics. Reading this story brings to mind a modern day Xena - a refreshingly reimagined and modern mythology. Not only is the work visually stunning, but the writing (not just the intricate plotting, but the dialogue of all things!) is probably the best of any currently running title. Rich with literary, mythological and artistic allusions, the story satisfies on an intellectual as well as a baser more action-oriented level.

Volume two continues Wonder Woman's quest to rescue and protect Zola, mother of Zeus's latest unborn demigod progeny from Hades, while Hera continues her jealous machinations against the child and its mother, siding with the ambitious Apollo in an ambitious bid to bring the child under her control and simultaneously discover the whereabouts of Zeus. The tale is the ultimate mob-style family power struggle, with serious character commentary and insight into old standbys like Hades that are clever, funny and fresh.